From Faith to Truth

Holy Cross of Davao College is a Catholic educational institution nurtured by three religious institutions to answer the needs of the community for quality education rooted in the tradition of the Catholic faith. From 1951 -1956, the Religious of the Virgin Mary Sisters (RVM) laid the foundation upon which the school was founded. The Foreign Mission Society of Quebec (PME Fathers) from 1957 – 1976 strengthened and improved these structures. And the Archdiocese of Davao from 1976 up to the present, building on the traditions of its predecessors,  expanded them to make the Holy Cross of Davao College a prime college in the city of Davao, providing affordable quality Catholic education not only to the people of the city but also to the neighboring provinces.

In 1951 – 1952 the RVM sisters opened an annex of the Immaculate Conception College (the present University of the Immaculate Conception) at Sta. Ana Avenue, Davao City upon the request of parents living in the Sta. Ana District. They asked the permission of the local bishop to construct the ICC annex building on a parcel of land owned by the Roman Catholic Apostolic Administrator of Davao. The annex provided kindergarten, elementary, and secondary courses for boys and girls. It became a separate school by school year 1955-1956 and was named the Holy Cross Academy of Davao. 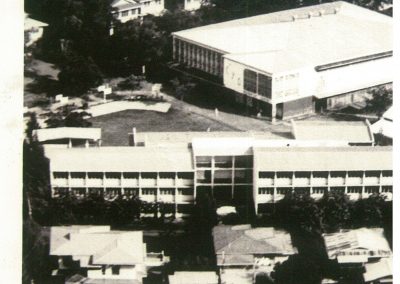 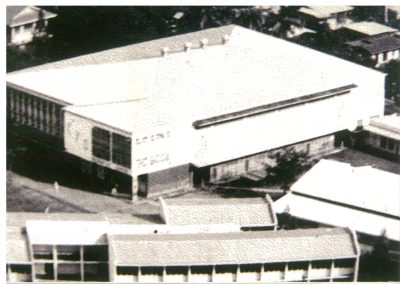 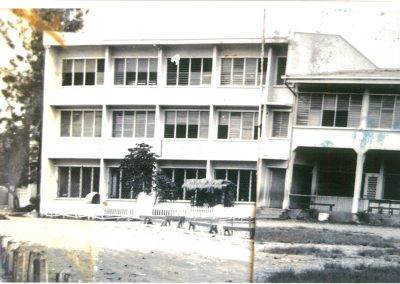 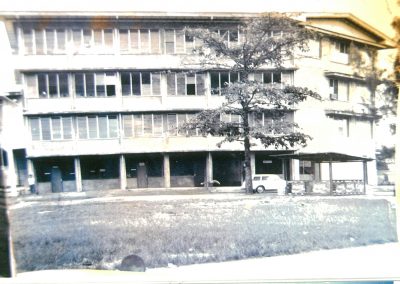 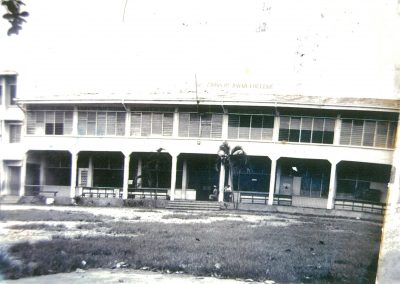 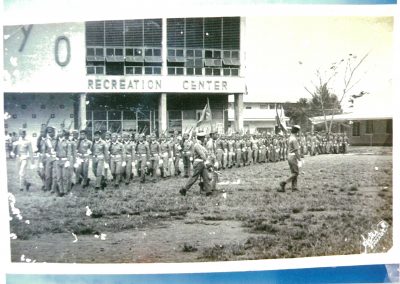 In April 1956, the RVM General Council decided to transfer the ownership of the school. The council informed the Most Reverend Clovis Thibault, PME, the first Apostolic Administrator and Bishop of Davao, about this decision. In that same year, the RVM Congregation represented by Superior General Mother Maria Catalina Dychitan sold the school building including all that goes with the functioning of a school to the Roman Catholic Apostolic Administrator of Davao.

Bishop Thibault then asked the Foreign Mission Society of Quebec (PME Fathers), whom he had earlier requested to establish a technical and industrial school, to maintain Holy Cross Academy of Davao  and to establish an exclusive school for boys. A land lease agreement was subsequently made between PME Regional Superior Rev. Fr. Lionel Labelle and Bishop Clovis Thibault.

The PME Fathers took over the school management in 1956-1957 with Rev. Fr. Jean Lalonde as the first school director and Rev. Fr. Leopold Charlesbois as assistant school director. The school was renamed Holy Cross of Davao School, Inc.  When   Fr. Lalonde left in 1959, Fr. Eloi Montambault, PME was appointed school director until Fr. Lalonde’s return in 1961.

The sixties saw a lot of changes in the school.  In SY 1964-1965, the school allowed the admission of girls to the elementary department.  In SY 1966-1967, college courses were offered and the school was renamed Holy Cross of Davao College, Inc.  A year after, Rev. Fr. Generoso C. Camiña , the first Filipino PME, was appointed Rector. He was succeeded by Mr. Emilio P. Palma Gil who was appointed school president on July 1, 1969.

The PME Fathers relinquished their right to the school in 1976. Due to lack of Filipino personnel needed to operate the school, the PME Fathers decided to transfer the ownership of school buildings, including the CYO gymnasium, its furniture and equipment, and all the rights and privileges of operating a school to the Roman Catholic Bishop of Davao.  On July 10, 1976, a Canonical Deed of Donation was made between PME Regional Superior Rev. Fr. Roland Denies and Archbishop Antonio Ll. Mabutas, DD, JCD. 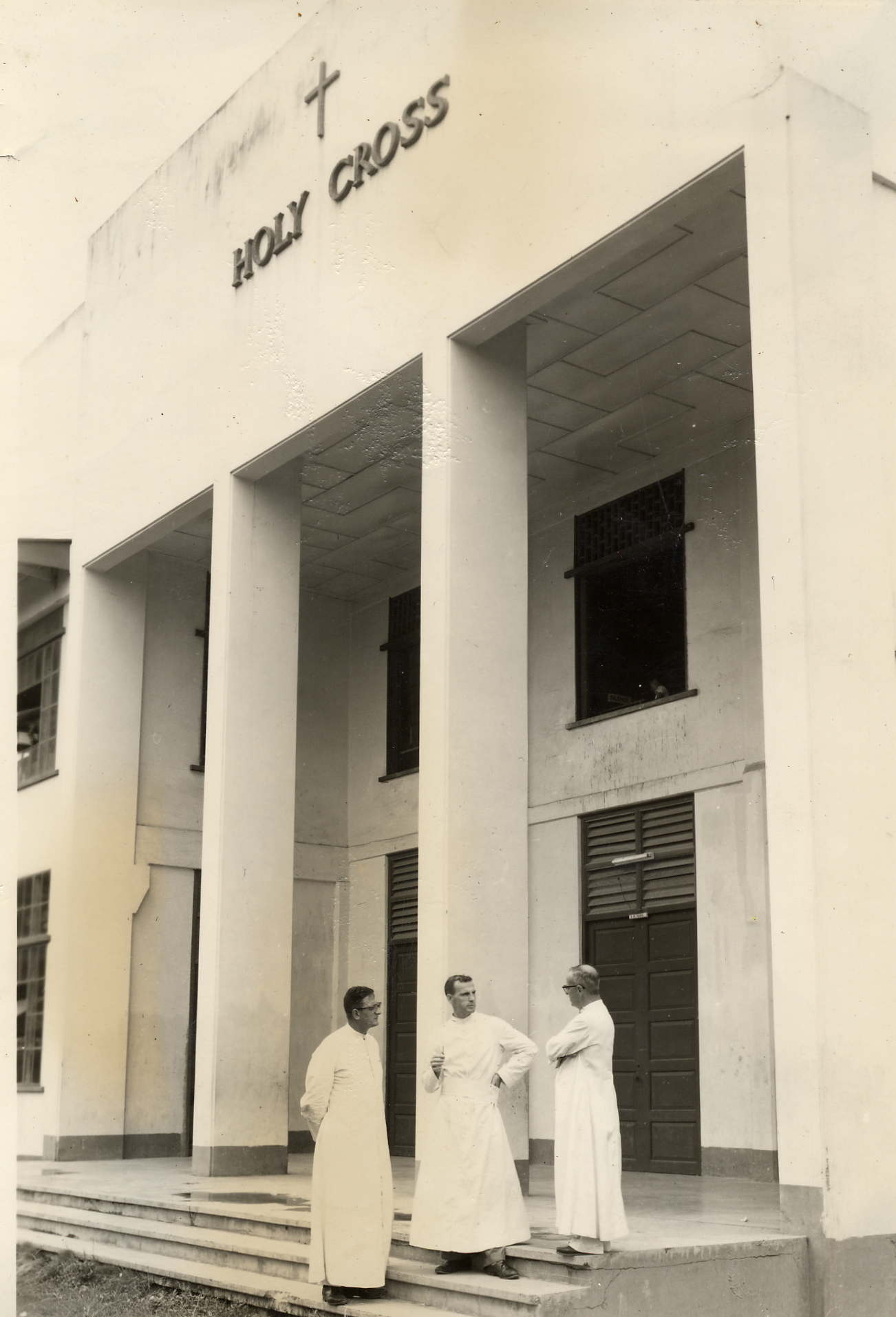 Holy Cross of Davao College, Inc. expanded in the eighties with the help of its benefactors.  In 1984, the grade school department, officially named Professor Hermann Gmeiner School, found a new campus site at Bajada, Davao City. The SOS Kinderdorf International constructed the grade school building and other facilities and offered these for the school’s perpetual use.  A year after, Archbishop Antonio Ll. Mabutas inaugurated and  blessed the new campus and its occupants in the presence  of  Prof. Hermann Gmeiner, founder of SOS Kinderdorf  International.  On August 29, 1984, Mr. Helmut Kutin, President of SOS Kinderdorf International, presented the speech laboratory, audio  visual center,  and sports center as additional facilities for the grade school department.

Other changes were introduced in the eighties. The high school department which continued to be an exclusive school for boys for many years was finally opened to female students. In SY 1985-1986, due to the persistent request of parents whose daughters were not allowed admission to the high school department, the school administration was finally convinced to allow the admission of female high school students. In the next school year (1986 – 1987) the Vision-Mission statement of the school was written and significant accreditation-related work was started. At the main campus, a five-storey building named after Prof. Hermann Gmeiner was built in 1989.

Change and growth also marked the nineties.  President Palma Gil retired on May 31, 1994. He was succeeded by Dr. Ma. Iris A. Melliza who was installed on September of the same year. President Melliza continued the accreditation work started by her predecessor.  Under her term, the government granted the school permit to operate master’s programs in education and economics on February 8, 1995.   On April 25, 1995 the Philippine Accrediting Association of Colleges, Schools and Universities (PAASCU) granted the liberal arts and education programs Level II status for three years.

The demands of the increasing student population and new academic programs were addressed through the expansion and improvement of the school’s physical facilities.

On February 6, 1996, Msgr. Mabutas blessed the new four-storey Archbishop Mabutas Hall which was constructed alongside the renovated four-storey Archbishop Thibault Hall. A new chapel was built in honor of the PME Fathers and was blessed on October 8, 1996. The school also acquired a 5-hectare shoreline property at Camudmud, Babak, Island Garden City of Samal, specifically for the requirements of the marine transportation program.

The year 1996 was a year of thanksgiving and celebration. The Archdiocese of Davao commemorated its 25th anniversary and Archbishop Antonio Ll. Mabutas celebrated his golden jubilee as priest and 35th year as bishop. On November 28, 1996, Most Rev. Fernando R. Capalla, DD was installed as Archbishop of Davao and was designated as the corporate president of HCDC.

The 2000’s ushered in major developments in the institution in terms of recognition and accreditation, course offerings, and physical facilities. 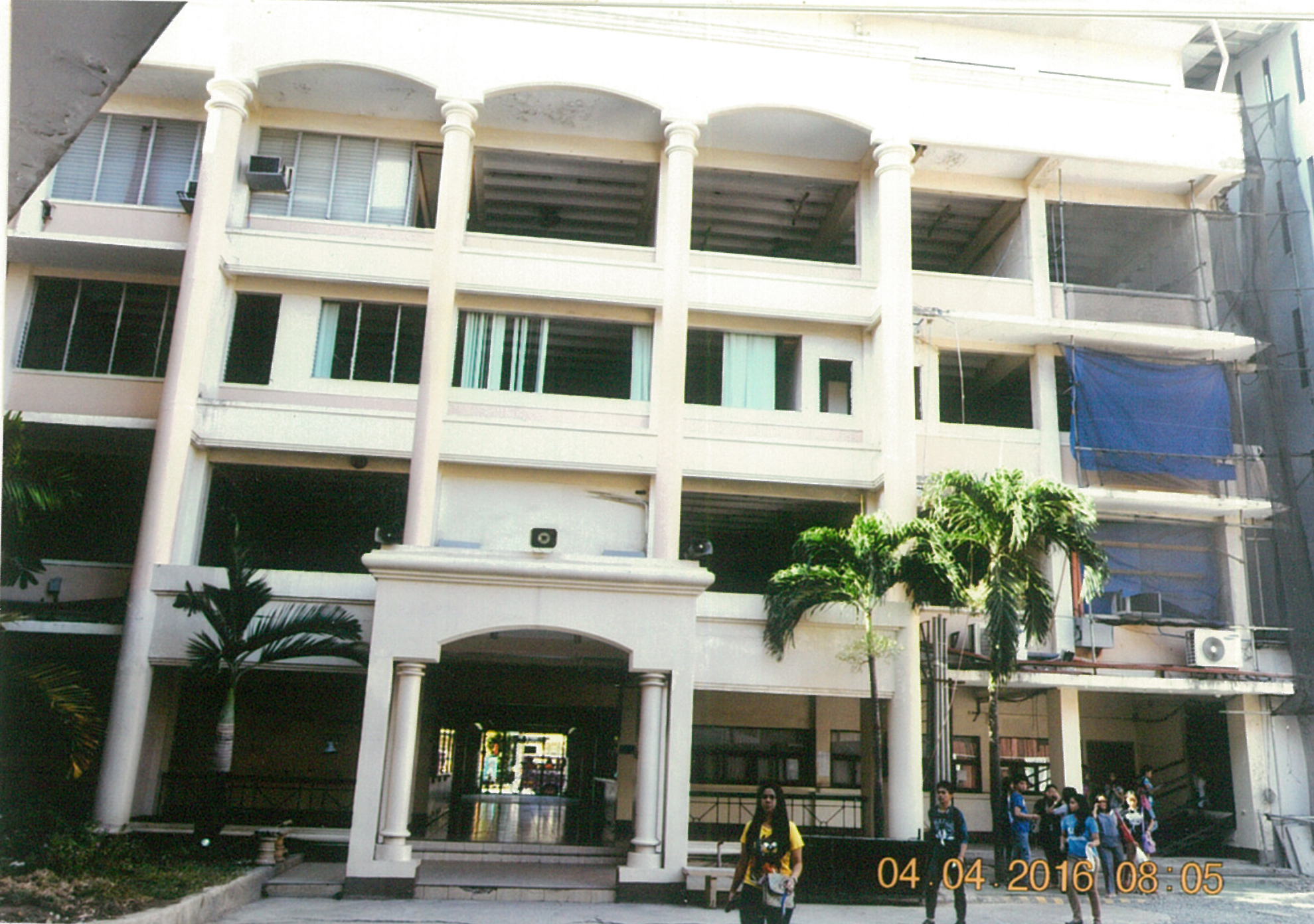 The school expanded its course offerings in the 2000s. In SY 2000-2001 AB major in Library Science became BS in Library and Information Science (BLIS). The school was given permit to offer BS Social Work in the same school year. This program was officially recognized in 2003. Other courses were offered during the period: 10-month Seafarer Rating Course, with major concentration either in Deck Rating or Stewarding in 2000; 5-month Computer Technician Course in 2001; BS Electronics and Communications Engineering and BS Computer Engineering in 2003; BS Criminology in 2005; BS Information Technology and BS Hotel and Restaurant Management in 2008; BS Accounting Technology in 2009. BS Commerce was converted into BS Business Administration in 2007. 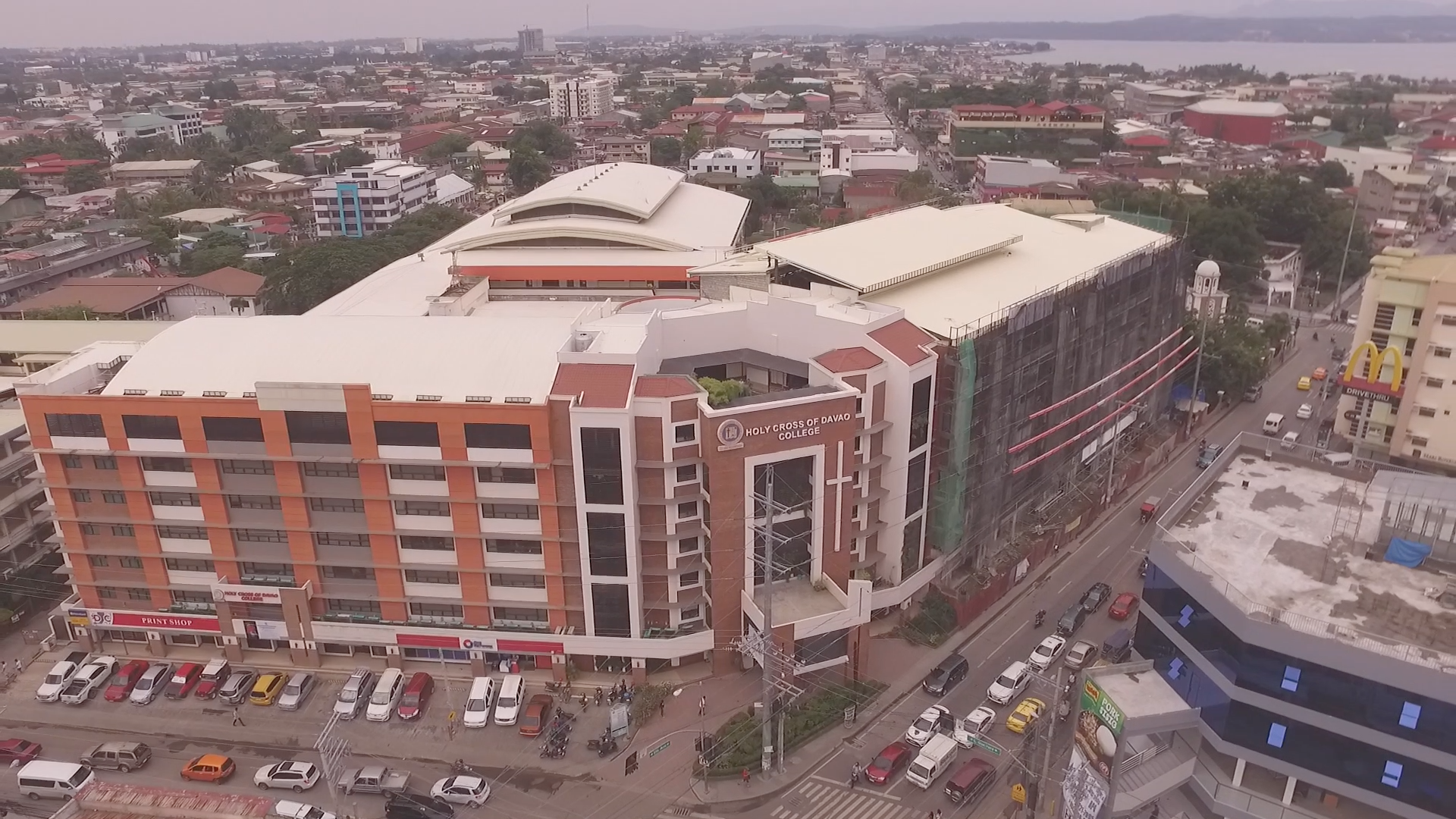 The college has also expanded physically.  A new four-storey building was completed in Bajada for the high school department which was housed together with the college department in the Sta. Ana campus.  In 2006 the department was transferred to the Bajada campus.  To accommodate the growing number of students, the HRM Building was constructed in 2010.

Holy Cross of Davao College has grown through the years. Starting with a national recognition, it is now internationally recognized.  With only two PAASCU accredited programs at first, now it has five programs accredited by four different accrediting bodies.  Three of these programs are Level III. Starting with basic education then with three college courses, it is now offering a total of 21 courses. Starting with a campus in Sta. Ana Avenue, Davao City now it also has campuses in Bajada, Davao City and Babak, Island Garden City of Samal.

At present Holy Cross of Davao College is working to extend its present boundaries, academically and physically. As it moves forward, it remains rooted in the tradition of its founders and their successors.  It is a center of Catholic formation for young men and women as it lives out the commitment of the RVM Sisters, the PME Fathers and the Archdiocese of Davao. 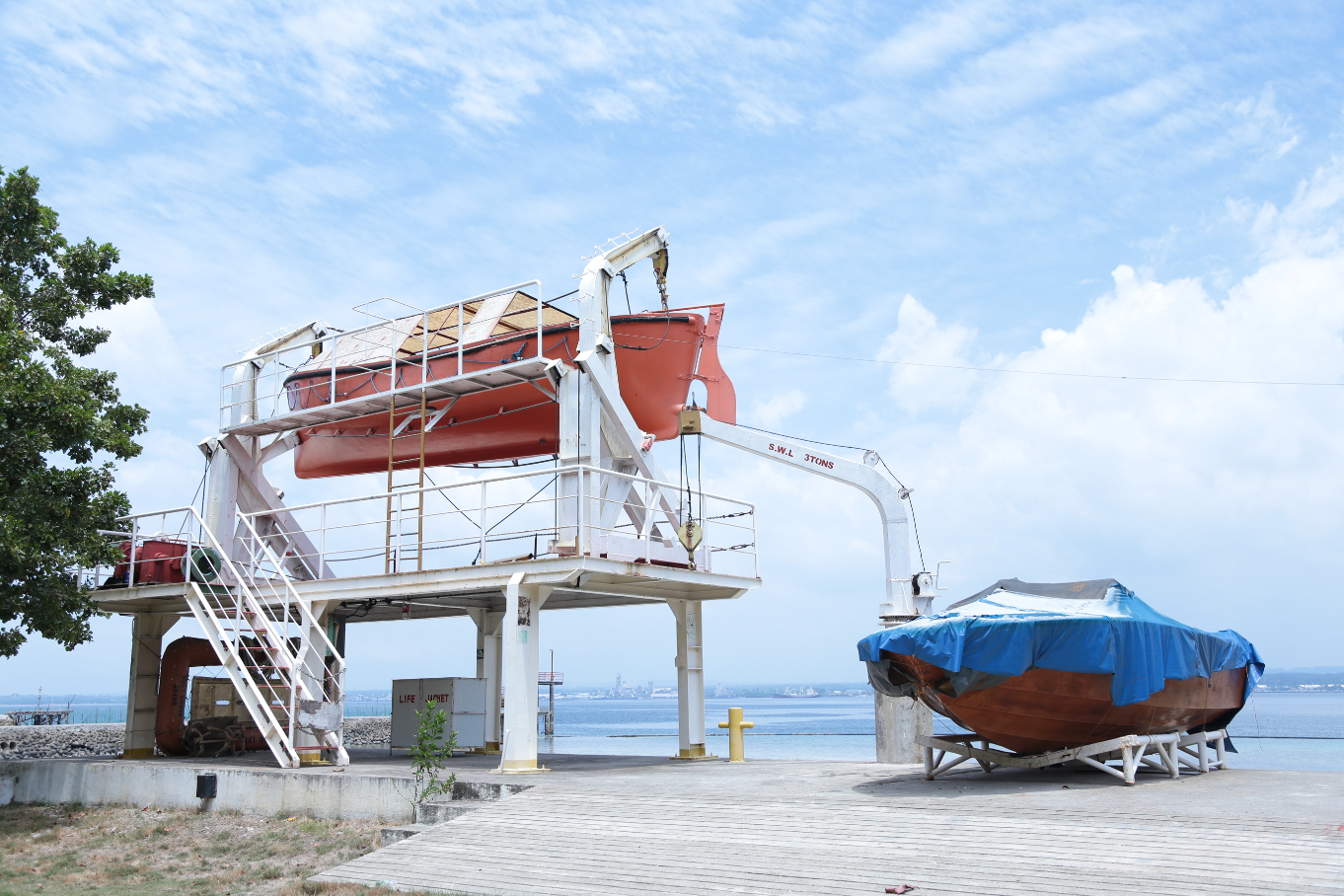